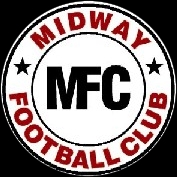 Since the end of Midway's first season they have travelled abroad on tour. Initially travelling with our friends from Kettering, Sargents FC, until the 2007 tour the Club has since travelled alone meeting some great people along the way.

Due to the last minute change of planning in 2008 the mystery tour was introduced meaning those signing up for the tour wouldn't find out their destination until they reached the departure airport. Mystery tours have taken place in 2008, 2009, 2010, 2012 and 2015.

Next years tour will see us return to our good friends FC Charly's in Oostmalle on the three yearly Belgium tour. The individual tour year pages provide a summary of each along with some of the photos from the trips.

Midway F.C. are based in Swadlincote, South Derbshire. Founded in 2002 we operate mens football teams for open age or over 35s.